I’m a black cat. I hate Halloween. Those idiots I have to share an apartment with decided I did not deserve a costume because – and I quote – I “am a Halloween costume.” Thanks. I’m not sure I should take that as a compliment, but anyway. Suits me fine. I hate dressing up. 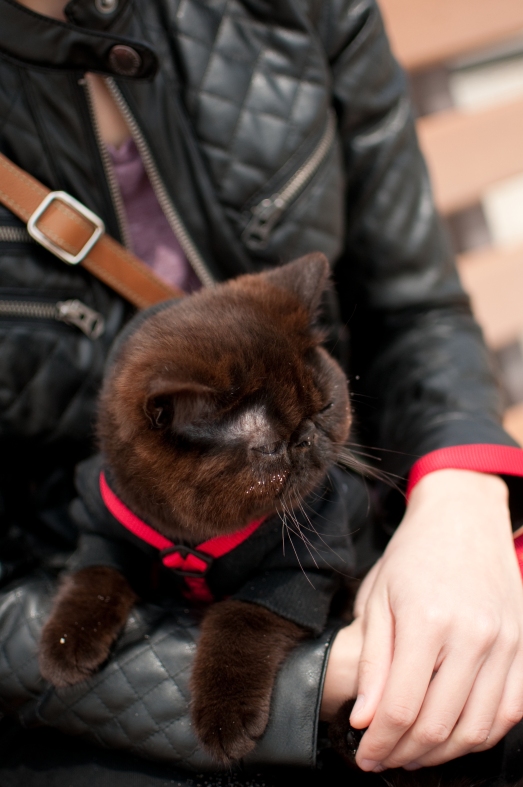 I hate dressing up

My retarded sister, on the other hand, loves having her fat body wrestled into all sorts of ridiculous outfits. Apparently, it’s “a pug thing”. A pug thing? A retard thing, more like.

Anyway, her outfit of choice (not her choice, mind, but she doesn’t really care either way) was this hideous triceratops headpiece. It made her look like even more of a weirdo than she normally does. Please allow me to illustrate: 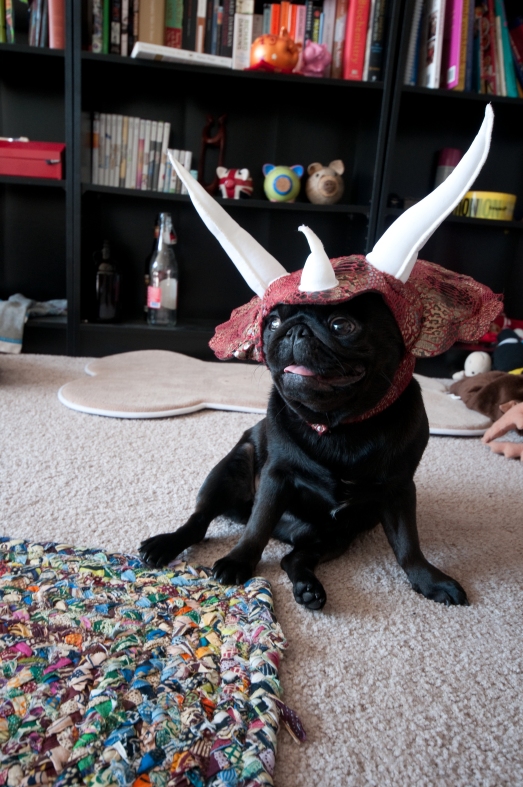 Pretty, isn’t she? Like Jurassic Park meets Dumb & Dumber, but with more slobber and less humour.

Can you believe I am forced to hang out with these people? The worst thing is, they don’t even treat me with the respect I deserve. Just the other night, the two others came home at 11pm (!), leaving me with Miss salivaface all night.. without food! I was so bloody starving by 10pm, I was ready to eat the dog.. I bet she tastes like the litterbox, though. I mean, her farts are more lethal than whatever it is they use for killing bedbugs in Manhattan Must be that horrible frozen bison crap she eats from time to time. I can’t believe the others tried to convince me to eat it when they first brought it home from the “pet shop”. You should have seen how excited they were.. “Gila, Gemuk, we’ve got new food! It’s really good, made from real bison. You’re gonna love it!”

Love it? Love it? If you think it’s so fantastic, why don’t you try it yourself, you presumptuous bastards? No, it’s all pizza and chicken and rice, and ice cream and burgers and juices for you.. and I get something that smells worse than the New York subway.

Sure, the dog happily ate it. She’d happily eat her own crap if it was served to her in her bowl. I’d like to think I’m just a tad more discerning than my dim-witted sibling, though. The three of them make me gag. Literally.

At least they had the sense not to put the ‘trick or treat me, please’ sign up on the apartment door on Halloween. A bunch of stinking kids would have really made my month. I guess they are capable of making sensible decisions after all.

I just wish they made them more often.